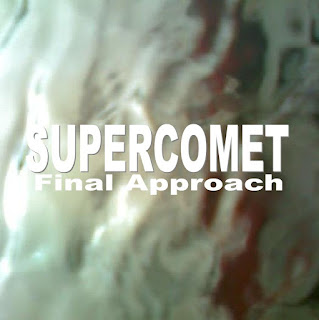 Over the years I have had the pleasure of knowing and sometimes working with some amazing musicians. Benjamin Kammin featured in the last post is one of those. Here is another.

Supercomet is Eric Olson. Better known as the guitarist in the blues band The Spectaculars. This is a side project he recorded in the early 2000s. It is more in the style of Pink Floyd with a touch of Black Crowes with solid songwriting and introspective lyrics. There is some amazing production here for being a home recorded project. Eric is one of those natural musicians with an ear for just the right sounds and the ability to achieve them with seemingly minimal effort.

I purchased my first mixing board from Eric when he upgraded his recording equipment before recording this album.

Eric comes from a musical family. Growing up in northern Wisconsin his father (my wife's uncle) grew tired of playing in regional country bands and taught his kids how to play so that he could play the music he liked. Eric took up the the guitar and his brother Mike the drums. Both are impressive multi-instrumentalists as well. I assume that is Mike on the drums here but both have the ability to switch roles with ease so without a "who did what" list I can't be sure. For all I know Eric might be playing everything.

I never had a physical copy of this album so I had to grab the songs from his ReverbNation page. I had to do some minor editing to smooth out some of the track transitions but other than that, this is how I found them.

The last track is an alternate version of a song from the recent album by the latest incarnation of their blues band The Spectaculars. I've always liked this song and I have a couple different versions but this one is my favorite. There have been a few different line-ups of the band over the years but the core has always been the father and sons trio. The current version is the first to have an album released and available for purchase (Let's Hear Us, Now!). Find it if you can. I have a live tape that I ripped from a video I took of a previous line-up. I posted that on my Sybil Records blog a long time ago and just updated the download links there.

In their early days they had a side band with an augmented line-up called Think Floyd. A Pink Floyd tribute band that did shows around the northern Wisconsin circuit. The first time I saw them perform was at a music festival as Think Floyd followed by a club show as The Spectaculars in my hometown of Appleton, Wisconsin. A great day and one of the first "dates" with my future wife.

The original cover was a non-text version of the cover used here. I added the band name and title.

Email ThisBlogThis!Share to TwitterShare to FacebookShare to Pinterest
Labels: Suercomet