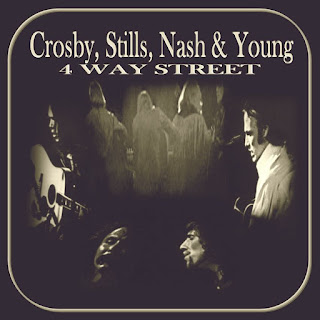 I've been using this down time to work on other projects around the house and in the studio so I haven't had much time to give to this blog. A while back AEC over at Albums Back from the Dead posted a CSNY album that imagined what a follow up to DeJa Vu might have sounded like using tracks from the solo albums released at the time. I chimed in with my take but had no plans of posting it here but with the lack of projects in my vault and to keep you guys busy while in quarantine and because it turned out so nice, I thought, why not?

After the release of Deja Vu in 1970 Crosby, Stills Nash and Young went on tour. Some of the shows were recorded and in April, 1971 they released a live album titled 4 Way Street. After the tour the band fell apart and all members commenced recording solo records. Those albums were released between September 1970 and May 1971.

In spite of the supposed bad blood that broke the band apart there was still some interplay between the members. Stephen provided some vocals on Neil's album. Neil played on David's and Graham's and Crosby-Nash laid down backing vocals on Stephen's and each others albums. So what if they came together and recorded another CSNY album proper? Enjoy.

In the comments of AEC's post, myself and The_Reconstructor chimed in with our opinions. I took clues from each of them and ran with it. I loosened my criteria a bit and used the previous album for precedence. With a few exceptions, that album was largely recorded separately, coming together mostly to do harmonies.

While songs that included two or more members were given priority, some of David's tracks were cut due to not actually having lyrics. Lots of vocals but the voices were used as instruments rather than tell a story. We still have an example of that style here in the track Orleans but at least he's singing words even if they are in another language. I used the tracklist from the live album for more clues, any song on there that had not appeared on a previous album was in the running. I also chose to allow solo acoustic numbers. Stephen setting the precedent with 4+20 on Deja Vu.

I ended up with 19 songs that fit on a single CD. On vinyl that would make a double album. I sequenced the tracks to split nicely onto four sides but also flow between them. Everyone gets at least one song per side and never two in a row.

I used the tracks as they are with the exception of three. Two Neil songs come from the 4 Way Street live album. I removed the audience before and after each of those as well as Neil's rap before Don't Let It Bring You Down. The live version of Southern Man was an obvious choice over the studio version. Not only is it the only track here to feature all four members, it's a full eight minutes longer with some great guitar interplay between Stephen and Neil making it a perfect side closer.

The last edit I made was to join Graham's Chicago with the reprise We Can Change The World to create a single track. I did this by ducking the opening chatter of the reprise under the last chords of Chicago to form a natural transition between them. Turned out nice.

The results fit in nicely within the overall discography and replaces the live album. Each member was prolific enough that the solo albums could still happen. Though arguably we took the cream of the crop from each. Originally I had sides one and two flipped. I thought that it would be clever to have each member open a side in the order of their names but the flow didn't feel right and Love The One You're With is an obvious album opener.

For the cover, I simplified the original.

David Crosby - If Only I Could Remember My Name
Stephen Stills - Stephen Stills
Graham Nash - Songs For Beginers
Neil Young - After The Gold Rush
CSN&Y - 4 Way Street
Posted by Uncle Dan at 4:27 AM

Email ThisBlogThis!Share to TwitterShare to FacebookShare to Pinterest
Labels: CSN&Y