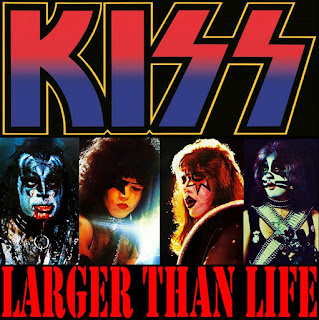 [I finally cleared some space in my Mega account. I have a small handful of projects to post and one special project in the works but that won't be ready for some time yet. I'll try to space the new posts out in hopes the new one will be ready by then but I can't promise.]

In late 1977 KISS released their second live album, KISS Alive II, only 2 years and three studio albums after their previous live album Alive!. Because of the close release dates between the live albums they decided that the second album should only contain songs from the last three albums which led to not having enough songs for a full two vinyl disc set. To fix this they recorded five new songs and put those on side four making the album a three sides live one studio.

What if instead of the live album they just put out a new album. This is my answer to that question.

1977 saw KISS transform from the lean, hungry and mean underdog band from New York into the superstar household names often referred to as SuperKISS. After Alive II they released a best of package, the solo albums and two more studio albums before SuperKISS was brought down and humbled. During this time they relesed a disco single and the average age of their concert attendees went from 18-20 down to 12-16.

For this comp I took the studio songs from Alive II and fleshed them out with the leftovers from the solo albums. I did drop one song, a cover of The Dave Clark Five's Anyway You Want It. I replaced that with another cover, Tossin' and Turnin' which was a part of their setlist in 1979, from Peter's solo album to give him a vocal. KISS have done covers before but never more than one per album. It's for this reason I did not use New York Groove from Ace's solo album. We do have two Ace songs.

I tried to pick the most KISS sounding songs from what was left from the solo albums after my 1978 construction. What's left is truly scraping the bottom of the barrel. The final result is quite enjoyable and sits in nice between Love Gun and Radioactive.

For the cover I reconstructed the Alive II album cover with the new title.
Posted by Uncle Dan at 3:50 AM

Email ThisBlogThis!Share to TwitterShare to FacebookShare to Pinterest
Labels: KISS